Anyone who read Maurice Sendak’s book, “Where the wild things are” as a child, was surly captured by the imaginative illustrations within, and will probably be happy to get introduced to his spiritual forefather, the 15th century Turkic painter, Muhammad Syiah Qalam, AKA Muhammad of the black pen.

Almost nothing is known for sure about the painter’s life. Most of his known works are situated in the Topkapi palace’s library and are collected in albums known as Murakka.

The Murakka albums are collected pieces of calligraphy and illustrations from separate sources, achieving popularity in the Islamic world, starting the 16th century. Due to the fact that these pieces of art where usually gathered from all around Dar al Islam, researchers occasionally find it extremely challenging to determine their exact dating and origin. This is particularly true regarding to the works of Siyah Qalam. 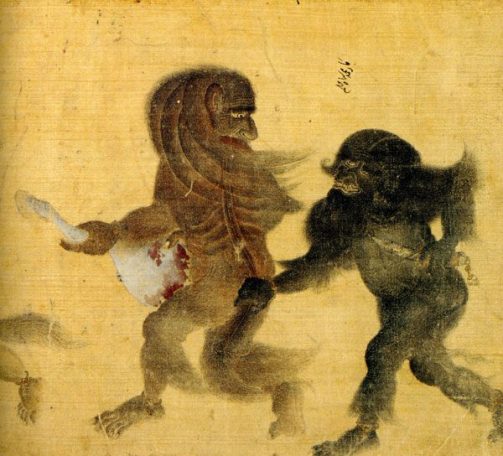 Demons fighting over a horse leg.

Despite the initial obscurity, modern research commonly dates Syiah Qalam`s time and place to 14th or 15th century`s Khorasan, although some dispute this notion and place him in Shiraz of the 16th centuey. In addition, it is hard to determine whether Siyah Qalam was indeed a real person or actually a school of art, joined together around a common style, nonetheless, these illustrations are no less then magical.

The unique Siyah Qalam style had no precedent with anything been done before in the Islamic world, both in regard of painting techniques, as well as the themes in use, and these include a delightful blend of nomadic life scenes, Sufi dervishes and an array of monsters and demons, perhaps representing remnants of the local central Asian Pre-Islamic folklore. 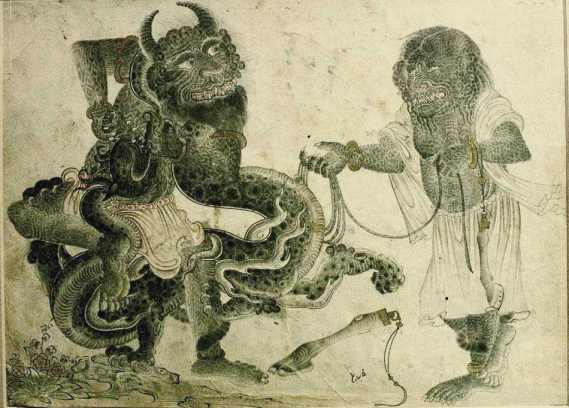 The Syiah Qalam style apparently represents mostly East Asian material culture and physical features, but contain Middle Eastern and Hellenistic influences as well. These mixed sources of influence are a unique product of the rare cultural- historical time frame, brought forth by the Mongol empire

. This massive empire, arrving its peak at the late 13th century, had generated a colossal momentum of inter-cultural exchange, shifting products, ideas, technologies and entire populations from one end of Eurasia to the other. The Siyah Qalam style represents a sheer example of the Mongol empire’s Eurasian melting pot.

As an example of these continental exchanges, the Siyah Qalam demon drawings hold a striking resemblance to the Tantric Buddhist guardian demons, known as Dharmapāla, as well as to Tang dynasty tomb guardians. This renewed encounter between Buddhism and Islam, five centuries after the eventual diminishing of Buddhism in central Asia, could have never accured without the Mongol horde’s shattering of Eurasia’s cultural boundaries. 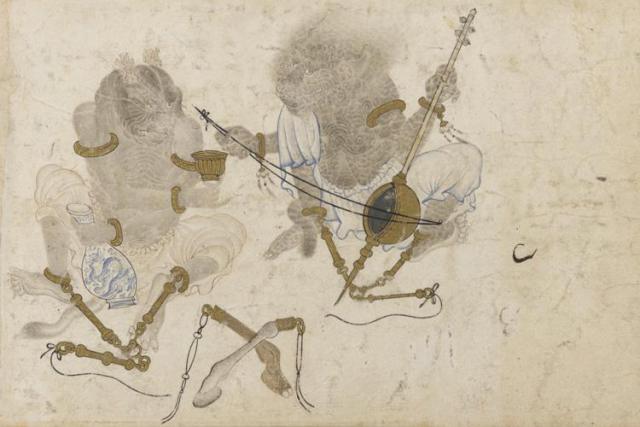 The picture above truly represents the unique Siyah Qalam style, depicting a couple of  demons, when one of them is playing an Iranian Kamanche (A spiked fiddle), while the other is apparently pouring wine from a distinctly Chinese blue and white porcelain ware. Oddly enough both of them are wearing jewelry and chained is stylistc manacles, strange days in post Mongol Eurasia.

It’s important to point out that the now iconic Chinese blue and white porcelain, best known for its Ming dynasty specimens, could have not come to being without the import of Cobalt blue oxide technology from Iran to China under the great Mongol exchange. Moreover, the representation of this artifact in a Siyah Qalam painting enables us to date it to a period no earlier than the 14th century.

Many of the Siyah Qalam illustrations depict a central Asian world that is very much a pre Islamic one. A world of wandering story tellers, roaming about under the steal gray sky and between dusty yurt camps, telling their fables which bind history and imagination, humans and demons, reality and dream.

Despite the strong pre Islamic influence, some of the paintings represent scenes from the lives of Sufi dervishes, which wandered between the borders of the vast steppe and the sedentary world to the south. One of the most active Sufi orders (Arbabic: Tariqat) in the Transoxania and Khorasan region, was the Qalandaryya tariqa. 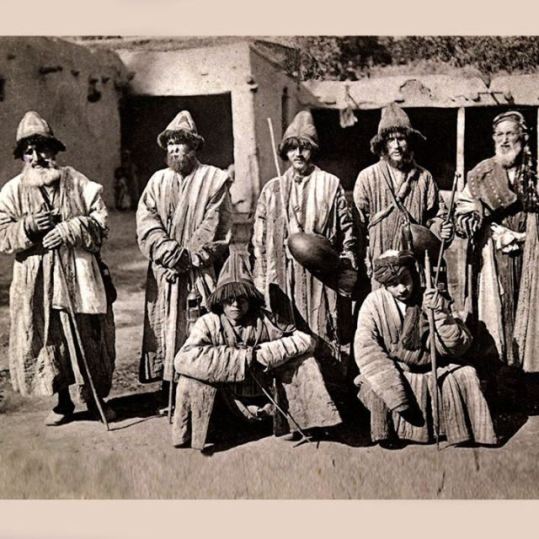 The origin of the Qalandryya had lost through the mists of time, but it seems that its birth is linked to that of another mystical group, known as the Malâmatiyya. This movement, originating in 9th century Khorasan represents one of the earliest stages of Islamic mysticisms, and in fact during the first phases of its existence, its members were not even regarded as Sufis by the major Sufi groups centered in Bagdad, but as an entirely separate group. This movement as well as the later Qalandryya, are examples of the central Asian mystical traditions, which might have been influenced by outer-Islamic sources, namely Shamanism, Buddhism and others, all present in the central Asian crossroads of the time.

The Malâmatiyya’s spiritual path held that the lower layers of the human soul, the Nafs(نَفْس,) corresponding with today’s modern idea of Ego, may even intensify under the influence of the mystical path, with all the self and social esteem which accompany it. Therefore, only attacking the Nafs by constant guilt and blame (malâma, ملامة) will eventually eradicate the stone hard Ego.

The Qalandryya, flourishing in central Asia starting the 11th century, was mostly active outside of the scholarly centers of the Iranian cities and the Middle East, and inclined to unorthodox approach, decentralized organization and even accepted into its ranks runaway slaves, convicts and other lowly members of society. These colourful bands roamed around the margins of the Islamic world practicing unorthodox methods which included music, dance, wine drinking and other obscenities for the purpose of spiritual elevation. These practices were obviously disopproved by the orthodox Muslim cleargy of the days, as well as among members of other Sufi Tariqat, such as the later Naqshbandyya, which strongly opposed the Qalandryya’s “drunk” Sufism.

The Siyah Qalam paintings vividly depicts these vagabond-mystics while practicing music, dancing ecstatically, conversing or simply submerged in meditation, and it appear that the artist, or artists knew their world intimately, perhaps actually being one of them.

Unfortunately, while lacking any textual description, Muhammad Siyah Qalam’s art had remain vague to us, and we can only assume the mythological and symbolic world they describe. This faded world of demons, shamans, wandering Sufis and nomads, a world of lost Turkic epics and forgotten musical tunes have remained blocked to our modern ears.

We can only hope that someday in the future, perhaps in some dusty library in Istanbul, Delhi or Tabriz there will be discovered an old manuscript that will shed some new light on those ancient depictions of central Asian life, which had faded long ago.

No Secrets - No Sides